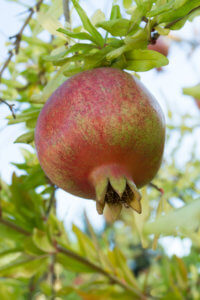 This is one of the reasons there has been such a flurry of research on pomegranate.

Pomegranate (Punica granatum) is a trendy modern-day superfood. It is well known to promote heart health.

First of all, it decreases plaque build-up. It also lowers cholesterol and blood sugar. Pomegranate even prevents the growth of cancerous tumors.

However, in some ways, this is old news.

Pomegranates were the earliest cultivated fruits. They have been used medicinally for thousands of years, going back to the time of the early Phoenicians and Greeks.

We review three of these studies below.

The effect of this healthy juice in reducing plaque was tested on 14 men and 5 women. These 19 individuals all had a 70% to 90% blockage of their carotid arteries.

All participants were on similar dosages (for their weight) of the same prescription medications. These medications included beta-blockers, ACE inhibitors, calcium channel blockers, and statin drugs for lowering cholesterol. 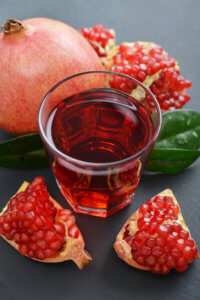 Ten of the 19 participants received about 8 ounces (240 ml) of pomegranate juice per day for one year.

Five of these participants continued doing so for two additional years.

Nine of the 19 participants served as the control group and did not receive pomegranate juice.

After only three months, the participants drinking the pomegranate juice showed a 13% decrease in their plaque thickness.

Six months later, the reduction in plaque thickness had risen to 22%.

After a year, drinking the juice reduced the plaque thickness in this group by 35%. It also lowered their systolic blood pressure by an average of twelve points.

Furthermore, the control group did not experience the same reduction in either their plaque build-up or their systolic blood pressure.

The results of this study are highly significant to the point it probably should have been front page news.

Drinking pomegranate juice gives no profit to pharmaceutical companies. Therefore, the news of this remarkable study has only quietly spread through the natural health community.

In 2013, ARYA Atherosclerosis published a clinical investigation of the acute effects of pomegranate study on blood pressure and endothelial function in hypertensive individuals.

This study demonstrated how fast acting drinking pomegranate juice can be. In other words, you can gain an immediate benefit from drinking just one small serving. The immediate benefit of drinking this juice comes with its proven long-term positive effects.

Thirteen men aged 39 to 68 participated in this study.

Each man was asked to fast for twelve hours before the study. They were then asked to drink about five ounces (150 ml) of pomegranate juice. Their blood pressure was checked twice. First, before they drank the juice. Second, about six hours later.

Drinking pomegranate juice is a natural way to lower blood pressure. This juice is truly an elixir for heart health.

The Nutrition Journal published this study in March 2014.

It involved more people compared to the first two studies. The participants to this study were patients who had to undergo kidney dialysis. In addition to blood pressure, this research also investigated the effects of pomegranate juice on triglyceride level and cholesterol.

One hundred and one male patients were selected. About three and one-third ounces (100 ml) of pomegranate juice were given to half of them three times per week for one year. The other half were given a placebo fluid.

Across the board, the men who received the pomegranate juice had marked improvements in their systolic blood pressure. Their pulse pressure, triglycerides levels, and HDL cholesterol levels also improved.

Furthermore, men who had been diagnosed with high blood pressure, and high triglyceride and low HDL levels showed more pronounced improvements. HDL is the good cholesterol that scavenges for and removes bad cholesterol.

What makes the results of this study most remarkable is the following. It took only a small amount of juice to see a marked improvement. Less than a half cup three times a week. It can easily be worked into anyone's routine.

The small amount required puts it within almost everyone's budget. Even though pure pomegranate juice concentrate with nothing added can be a bit pricey.

Why does pomegranate juice produce such amazing health benefits?

As we said above, pomegranate juice has one of the most powerful antioxidants known ( punicalagin). Punicalagin prevents the oxidation of LDL cholesterol. Once LDL cholesterol become oxidized, it causes the formation of plaque. This leads to various health conditions such as coronary heart disease or peripheral vascular disease.

Not only does punicalagin have antioxidant properties, it is also strongly anti-fungal and anti-bacterial.

Pomegranate juice will have a more powerful influence on your system if you have a well-balanced healthy intestinal biota.

Good bacteria in your gut break down the punicalagin into other antioxidants like ellagic acid and urolithins. Gut flora also helps the punicalagin work more efficiently.

Therefore, you may want to add probiotics or foods containing probiotics to your diet in addition to pomegranate juice. 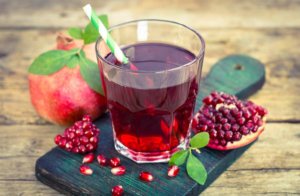 Is pomegranate juice good for you?

Pomegranate juice works on the underlying problem of the constant oxidation of lipid molecules. It very significantly reduces this problem. This allows your body to heal itself and not continue down the path of rapid deterioration.

Millions of people take blood pressure lowering and statin drugs. This number is growing every year. Unfortunately, these drugs often cause debilitating side effects like joint pain and limited mobility. Moreover, these drugs do little to address the underlying causes of these common diseases.

However, if you decide to wean off your prescription drugs, be sure to do so under the supervision of your doctor. He can ensure you are doing it safely.