Spirulina benefits for health are numerous and powerful. Spirulina, a “blue-green algae,” is one of the most nutrient dense foods you can eat. It is a true nutritional superstar.

In fact, spirulina is nutrient dense. This is why NASA has been using spirulina for decades. They have been feeding spirulina to the astronauts during their missions.

After years of research, the European Space Agency and NASA have thoroughly investigated spirulina benefits.

They have both proposed spirulina as a primary food. Deep space missions and colonies established on other planets would cultivate this superfood.

In this post, we explore spirulina benefits for health. We answer basic questions such as what is spirulina good for, how to supplement with spirulina or how to use spirulina in powder or tablet form.

We also provide other interesting facts you need to know about this nutritional superstar.

What are the spirulina benefits?

Here's a spirulina fact that may astonish you.

The human body needs essential amino acids to survive. Therefore, they are the most important by far to get into your diet. 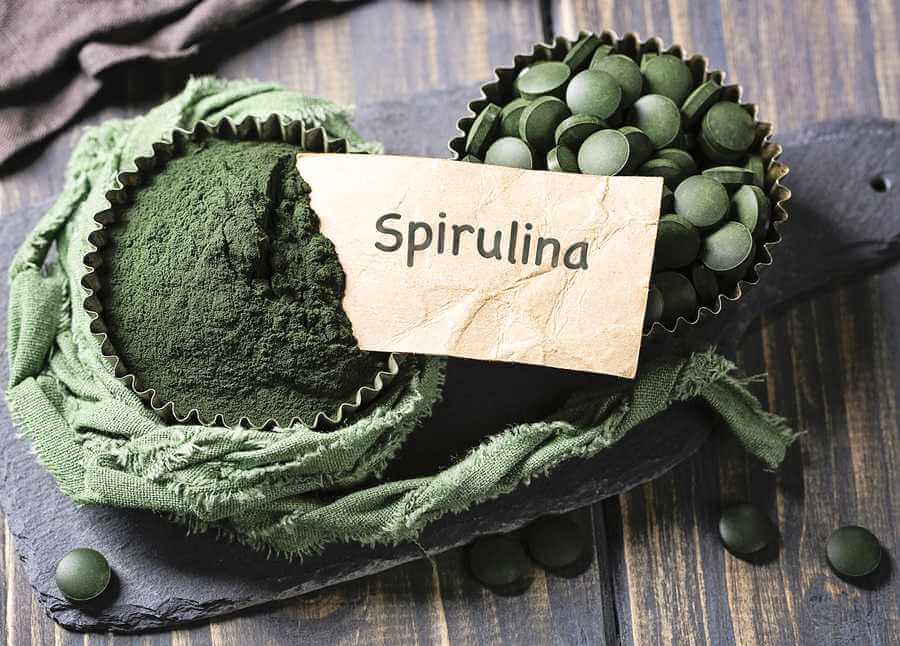 The amino acids in spirulina are in good proportions. And in a more digestible state than what you find in animal protein. In fact, spirulina has a better protein profile than meat (beef, buffalo, chicken, turkey), eggs, or fish!

Spirulina is the ONLY non-animal food that contains all nine essential amino acids. Beans, lentils, nuts, and soy are all good vegetarian sources of protein.

But you could not survive on any of these alone. None of them contain all nine essential amino acids. Thus, vegans often have so much trouble getting all the amino acids they need.

To get a healthy serving of protein, you would only need to take 2 tablespoons of spirulina powder. Thus, it is the perfect supplement for vegans.

It's also a good choice for others who want to limit their meat consumption, in terms of protein profile.

Spirulina contains all the B vitamins and is especially high in riboflavin and thiamin.

It also contains healthy quantities of vitamins A, C, E, and K.

It contains trace amounts of vitamin D. Thus, you shouldn't rely on spirulina as a source for this important vitamin.

Spirulina also contains healthy doses of magnesium and manganese. As we know, many people don't get enough of these two important minerals.

Finally, spirulina contains many trace elements. These elements are becoming more difficult to get into our diet. This is due to the depleted soils that so many of our vegetables and fruits are grown in.

This is a biggie, especially if you don't eat enough fish and seafood, so pay close attention.

Spirulina is LOADED with omega-3. Plant based sources of omega-3 such as walnuts and flax seeds contain the ALA version of omega-3. Yet, spirulina contains also the DHA and EPA versions of omega-3.

A healthy 21-year-old athlete can only convert about 15% to 20% of ALA into a usable form of omega-3 in the body. As we get older (and sicker), that conversion rate drops to less than 10%.

Thus, it is far better that you get the DHA and EPA versions of omega-3. By doing so, your body will less likely incur any loss due to failure to convert it.

Spirulina is also loaded with GLA. GLA is the only omega-6 fatty acid that is hugely beneficial to the body. It is an anti-aging, anti-inflammatory, and highly beneficial fat.

It's even touted as helping to reduce the ill effects of asthma, Type 2 diabetes, and rheumatoid arthritis. Some scientists believe it helps prevent cancer.

Other spirulina benefits for health

You've likely heard about how good antioxidants are. They roam around the body getting rid of free radicals. These free radicals seem to be at the root of many diseases, including cancer.

Spirulina even has more antioxidants than goji berries. Many consider these berries as the ultimate source of antioxidants.

Spirulina also contains copious amounts of chlorophyll. Chlorophyll is known to build up the blood in people who are anemic or just need more energy and oxygen.

Unique to spirulina is a pigment called phycocyanin. This pigment is closely related to bilirubin, found in the liver. It is one of the reasons that the amino acids found in spirulina can be digested and utilized by the body so quickly.

Spirulina is densely packed with nutrients. Then, when you consume some, it really feels you up.

Even better, it also curbs your appetite for the rest of the day. It makes it easier to not think about food. Or be tempted to eat unhealthy snacks.

Spirulina is also a good detoxifier. It's not quite as good at detoxifying as chlorella. But it works very well in conjunction with this green algae.

How nutritious is spirulina?

Researchers at NASA have determined that 1 kilogram of spirulina powder (about 2.2 pounds) is as nutritious as 1,000 kilograms of vegetables. That's about 2200 pounds of vegetables!

Plus, there is no vegetable that has the same amount of protein, or even close to it. Remember too, no vegetable has all nine essential amino acids! 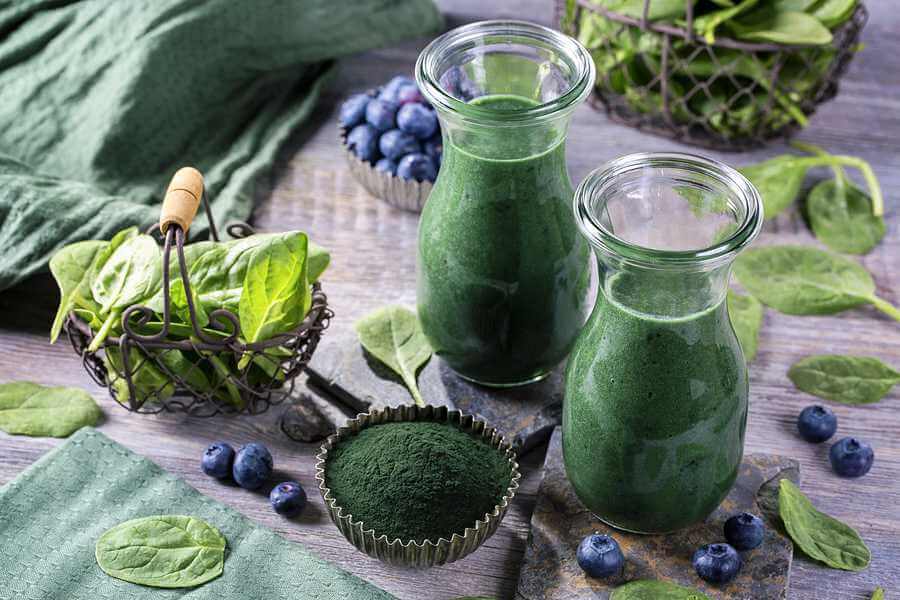 How to incorporate spirulina into your diet?

At this point, it is a legitimate question to ask yourself if you really want to enjoy spirulina benefits.

How to take spirulina powder?

The easiest way to buy Spirulina for adding to recipes is in powder form. You can buy it now at almost all health food stores or natural food stores.

But, you'll likely save money if you buy Spirulina online from a reputable dealer. You'll also be able to judge better if it's a pristine source of spirulina.

Many people use spirulina powder in their smoothies. They replace other common protein sources such as whey protein or peanut butter.

It has a sort of grassy earthy flavor. It pairs well with popular smoothie fruits such as banana and mango.

Spirulina also tastes great with yogurt if you use that for your smoothie bases. It blends well with kale or spinach smoothies too.

Any recipe you add spirulina powder to will end up being blue-green in color. Luckily, it's a beautiful shade of blue-green! While this may be a little weird at first, it can also be incredibly fun, especially for kids.

You can turn your hummus dip into a blue-green “Martian” dip. And you can give your guacamole some blue-green dazzling style).

How about some blue-green chicken noodle soup to cheer up your child when she's home sick with the flu?

You can also make Martian pancakes and Martian pasta. Hey, if you can eat pasta made with spinach, surely you can get into blue-green spirulina pasta.

How to take spirulina tablets?

You can also buy spirulina in tablet form to take as health supplements. Many health conscience people are taking spirulina tablets instead of coffee in the morning to perk them up.

They are also a great supplement on days where your nutrition has not been the best.

So, if you ate a granola bar for breakfast (you do know these are just like candy bars, right?) and pizza for dinner, you might want to pop a few extra spirulina tablets that night.

If you buy spirulina in tablet form, you can conveniently use it as a meal substitute when you get busy.

Wake up late and can't fix breakfast? Grab some spirulina tablets as you head out the door.

Get caught in a late meeting at work and don't have time for lunch? Keep some spirulina tablets in your desk drawer for just such emergencies.

Need a pick me up when you get brain fog or feel low on energy? Pop in a few spirulina tablets for a natural mental and physical boost.

Why professional athletes love spirulina so much?

Spirulina is becoming the favorite food of hard training professional athletes. They take it before intense workouts. It gives them more energy.

Unlike other foods, spirulina gets absorbed almost immediately. It can give you a significant energy boost in less than five minutes. Athletes also consume it after their workouts. It helps them recover faster.

Spirulina creates nitric oxide which dilates the blood vessels. This sends more blood to the muscles and organs. It helps athletes recover faster.

Luckily, you can get all these spirulina benefits when you exercise.

What are the side effects of spirulina?

The World Health Organization has determined that spirulina could help to eradicate world hunger. This is in large part because they think it is safe to feed to children.

However, there will always be a few people who find they react in a negative way to a new food.

Even fewer people report having bouts of diarrhea and swelling in their legs. Mild allergic reactions (rash, redness, itchiness, or hives) have been reported.

If you have an adverse reaction to spirulina, your batch may be contaminated with toxins. These toxins could be heavy metals or pathogenic bacteria.

Ensure that your source cultivate spirulina in pristine conditions. Make sure that uncontaminated water was not used.

This is especially true if you should decide to drink spirulina smoothies every morning. Or, substitute spirulina tablets for your lunch every day.

If you have phenylketonuria (PKU), an inherited genetic disorder, you will not be able to consume spirulina. The reason is the fact that it contains phenylalanine. People with PKU cannot metabolize phenylalanine.

You may proceed slowly with spirulina, if you have an autoimmune disease such as rheumatoid arthritis or lupus. Spirulina indeed stimulates the immune system.

This is normally a good thing but not if your immune system is already in hyper drive and attacking your own body.

If you have not tried spirulina yet, it's time to do it. It is a food that packs a very powerful nutritional punch. This superfood is also extremely convenient for anyone with a busy lifestyle, especially in tablet form.